My newest model is done, but truly he’s not so new. In fact, I started him five years ago when I first took a dremel to a Breyer Citation ornament. He languished in my work in progress zone for years, getting attention every once in a while. The poor thing even went through two or three head swaps as I tried to find one of the right size and worked on my head sculpting skills.

I finally got truly motivated last winter when I decided this horse would be my BreyerWest performance horse. And several months later, he was finally done.

I nearly defeated myself by deciding to paint him buckskin, a color I’ve never done in oils. And of course since he’s a large horse, he also needed a bunch of new tack. But I managed to get him and his gear done in time for BreyerWest, where he was the Overall Performance Champion. 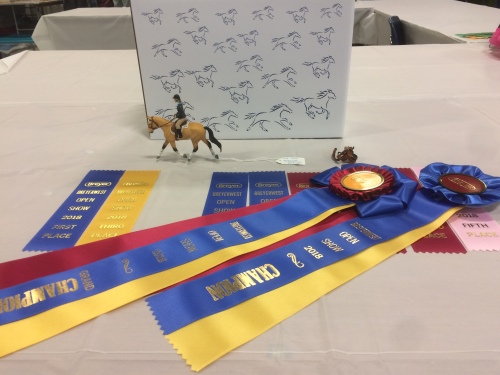 I am finally happy with how Fancy (as I called him while in progress) turned out, especially his floating trot. His head is from the Breyer stablemate Django mold, which turned out to be just the right size- and has such sweet character. His neck, back, mane, tail, ears and much of his legs is totally new sculpting.

This month I’ve entered Pieces of Flair in the Breyerfest Best Customs Contest, in the Performance Excellence division. His entry is an expanded version of his winning stock work entry from BreyerWest. He’s shown doing a really neat event called Rodear, which is a newly-developed version of a cattle dog trial.

The goal is to have the cows go into the chute and over the bridge. Fancy and his rider herd the cows while their cattle dog (left) blocks the other end of the chute. 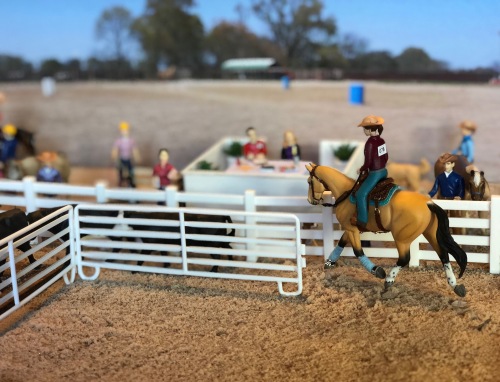 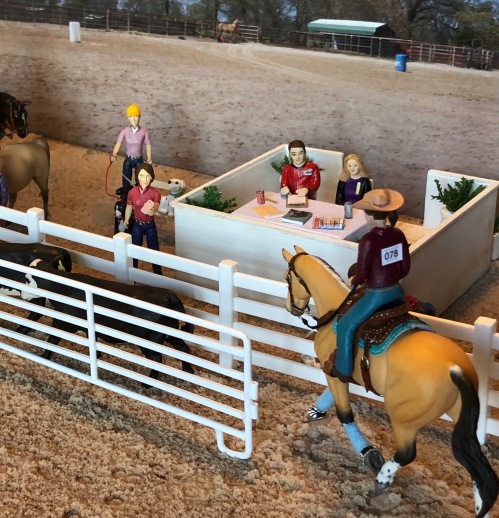 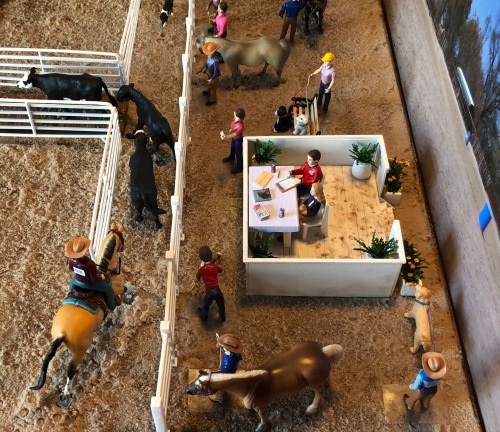 The scene from above, showing all the fun background elements.

It was fun to take the time to set up a performance entry as a full scene, with more background action and detail than is usual for a live show. The scene includes other competitors with their horses (can you spot Puns N Roses, my 2016 BreyerWest performance champ?) and dogs, spectators snacking on concessions, and a brave kitty taunting one of the doggos :)

If I’m lucky, I’ll be selected as one of the finalists and get to bring Fancy and his gear to Kentucky with me for exhibition at Breyerfest!

What a trip! My NAN/Breyerfest Extravaganza, aka Kentucky Ahoy, aka 2500 Miles to Paradise, aka Sleep is for the Weak… is over. I’m home, rested, recovered, and even starting to organize my hundreds of photos.

I partially did this trip because I wanted to understand what all the fuss was about, and boy, do I! I’m going to do my best to share my experiences here in a series of posts- I could never fit it into one or two!

Our roadtrip started at 6am on a Friday. With three showstrings, road snacks, several duffles, and multiple totes of sales neatly tetrised into our beautiful van, we headed east. And kept going east, and kept going, and going.

You know, when you have good friends and good conversations, 2500 miles just isn’t so bad.

We switched drivers regularly, marveled at the intriguing souvenirs sold at truck stops, looked for antelope, and complained (once we got to Nebraska) about the endless cornfields. We only got lost once, very briefly, in the wilds of south western Iowa.

And finally, one day three, we reached Kentucky.

A most welcome sight

From there, it was just a little bit longer to our final destination, the famed Clarion Hotel in Lexington. Roughly sixty hours after we left home, we had arrived. Let the festivities begin!

Unpacking at the CHIN

2016 is going to be a big year for me, hobby wise. Through luck, circumstance, and a bit of cajoling, I am planning to attend Breyerfest and NAN in July. And because that’s not scary enough, I’m also attending Breyerwest in March.

Breyerwest is something like a scaled down Breyerfest, which takes place on the west coast. It’s a way for hobbyists who can’t regularly travel to Kentucky to get a similarly awesome event. Breyerwest hasn’t been held in a few years, but I’m hoping that if this year goes well it will become a regular thing. I’m very lucky to have Breyerwest happening less than two hours away. Like ‘Fest, ‘West is going to have live shows, demonstrations, seminars, equine guests, and more!

Champion pony Smokin’ Double Dutch will be there!

I’m excited and also apprehensive about these big plans. These will be the biggest three live shows I’ve ever been to, with some seriously tough competition. I’ve got a mighty to-do list organized by task and priority to guide me through the preparation and hopefully maintain some sanity.

One of the things I’m looking forward to most about these events is visiting with hobbyists. I’ll get to spend lots of time with some of my favorite people, and I’ll finally get to meet folks who’ve I’ve only talked to online. Give me a shout if you’re planning to attend!

I’ve never been more invested in Breyerfest than this year. Not only have I been helping Erin ready her performance entries for the live show (and making some last minute props!), but I also have a model of my own attending and competing! My horse Nightfox was chosen as a finalist in Breyer’s Custom Contest!

Breyer announced this contest in mid May, and (with a little encouragement) I set to work finalizing some details so I could enter Nightfox in the Performance Excellence division.

As someone who makes all my own customs, tack, props, etc., it’s wonderful to have Breyer host a contest where individuals enter horses of their own creation. I take a lot of pride in my DIY approach to the hobby, and it’s very rewarding to have it recognized.

All of the contest finalists in each division will be on display at Breyerfest from Thursday afternoon through Saturday night in the Artisan’s Gallery. Since I’m not attending, Erin will be setting up my scene (and thus making her first foray into mini performance!)

Thank you to Breyer for holding this contest and the judges for donating their time. I’m so honored to have been chosen and excited to have my work on display at the model horse event of the year. It’s my own little Armchair Breyerfest!

Are you going to Breyerfest this year? Send me a picture of yourself with my entry! It would totally make my day :D