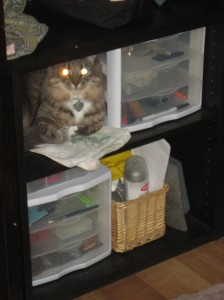 I’ve been working a little bit each day on my three micro mini racehorses and they are now done. My finish work supplies have been staying out on the table and the place they went on the shelf has already been usurped.

The next step in my diorama is to add tack and jockeys. And that means I need to decide on silk colors for the three horses. I wanted to make sure I was being authentic, so I did a bit of research on jockey’s silks.

Thanks to this cool blog post about the history of jockey’s attire and the classism inherent in horse racing, I learned some of the basic rules of silks. In designing my silks I needed to keep in mind that jockeys wear white pants, hats should match silks, and silks can have a maximum of four colors. And then I found this wonderful Design Your Own Silks website!

I’m happy with one of the sets of silks I designed, but I’m still debating about the other two so I thought I’d post them here for some feedback. But first, meet the race horses:

I am happy with the silks I chose for Catharsis, which are purple, white, and black. Catharsis will be shown finishing the race in second place behind Rumble Strip. He may wear a set of blinkers if I can figure out how to make little tiny eye cups, in which case his blinkers would most likely be purple to match his jockey.

Space Cowboy’s color scheme is red and yellow, with either blue or black. Here are three options I came up with:

Rumble Strip’s color scheme is green and white. I am torn between these two designs:

What do you think? Any other ideas?

From last post: “She looks funny now…but with some careful filing and sanding, those will hopefully start to look like fetlocks, pasterns, and hooves.” Emphasis added.

When I started to file and sculpt down the blobs of last post into new hooves for Sierra Roana, one of them broke right off, leaving her the original pewter stump. The other seems solid, but for stability in the broken leg I needed to do something more drastic.

I filed down her cannon bone to very thin pewter, and then used super glue to attach a thin wire all the way up the leg and out the bottom. This armature acts as a base for a sculpted pastern and hoof. The super glue, as well as epoxy sculpture over the wire, holds it firmly in place.

So now I’m back to the careful resculpting of both hooves in preparation for an acrylic rod and permanent base. I’m going slowly and letting each new bit of epoxy dry before I add to it so that I build up the desired shape slowly and avoid destroying my hard work by pushing it. Just a few minutes a day and now once again she’s looking like a four legged creature.

One of my most accomplished show horses is Sierra Roana, my Maggie Bennett Rearing Horse. Unfortunately, because of her cool action pose and her material (pewter) she broke at the rear fetlocks earlier this year.

I had attempted to repair her once before, by putting an acrylic rod in her belly and down into her base. But that was really difficult to do properly- I wanted to get her back into her original dynamic pose, and the repair was made even more difficult because I had to line up her cannons properly with her broken fetlocks.

This time I had two new ideas for a full restoration. One, I wanted to insert the acrylic rod further into her body for increased stability. And two, I decided to just sculpt new fetlocks and hooves for her instead of trying to match up her two halves properly while attaching the acrylic rod.

The fact that Maggie Bennett’s micro minis are cast in pewter makes them wonderfully affordable, but unfortunately it’s difficult to make holes in. (Easy to prep, though, for anyone interested). I made a hole in her belly using my carbide scraper. But unlike a dremeled hole, its not very exact or straight or perfectly round. That makes for more restorative sculpting and pastelling later, but it was a necessary evil to attach the acrylic rod.

But before I do that, she needed new feet. Straight epoxy won’t stick to the broken pewter and it’s two small to insert wire armatures, so I made super glue and baking soda lumps on the bottoms of her cannons. 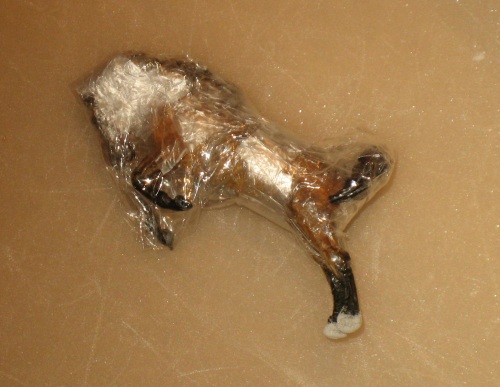 She looks funny now (especially with her protective cellophane coat) but with some careful filing and sanding, those will hopefully start to look like fetlocks, pasterns, and hooves.

Odds and Ends and Links and Pictures

Since I came in on one of my off days this week I had Monday off, which is a real treat. I spent most of the time chillaxing with ponies and have various goodies to share.

For those of you who don’t read Jennifer Buxton’s amazing blog, I wanted to re-post a link she posted for the MEPSA (Model Equine Photo Shower’s Association) Performance Clinic. Members can submit their photos in various classes and have them placed and critiqued by others. There is also lots of information on basic performance classes. This is a great resource for anyone wanting to learn more about performance showing.

For the first time in a while I checked out the Model Horse Sales Pages and found not one but TWO Stablemate Fjord customs. One is by Shannon Mayfield on the Highland Pony mold (ad here) and the other is by Jeanine Olsen on the Para Dressage mold (ad here). The Para Dressage mold does make a lovely Fjord, but I like the Highland too. Without the feathers the legs look cleaner but strong. I think my guy will end up working out as one- and I can always show him as a young stallion if I still don’t think he’s beefy enough.

I put in quite a few hours on my little race horse project today- I don’t think I’ve mentioned it on the blog yet, but I’m making three micro mini race horses with (non-removable) tack and jockeys to put in a little diorama. They’ll be in the homestretch about to cross the finish line.

I’m still in the early stages. Right now I’ve got my three horses about where they need to be, with a little more epoxy work necessary. Then they’ll need to have their acrylic rods put in before I start painting them. But before that, I’ve got to finish sculpting the jockeys, since they need to be fitted to each horse. And right now they look like little deformed water skippers.

And the horses are looking funky in their acrylic “primer” and cellophane safety suits.

And now back to my “studio.” I hope to sneak in another hour or two of fun before I have to think about boring things like chores or eating.

The results from the May 2011 IMEHA show are starting to trickle in, and boy did I have a surprise when I went and checked my horses! I saw on the list serve email that the Custom Mini Show had been judged (IMEHA has separate “Custom Shows” for workmanship and “Conformation Shows” for halter/breed classes). I was flabbergasted to see, on my mare Sierra Roana’s page, this listing:

I was so surprised, in fact, that I went to the actual show results page because I thought this might be some kind of error. None of my models has ever placed in one of the big custom workmanship classes.

And when I went to the show results page I was in for an even bigger surprise!

The only sad thing about this story is that shortly after I took that photo, Sierra Roana broke- the tiny, delicate stress points on her rear fetlocks gave out. I have every intention of fixing her, but it’s very difficult to get her exactly back in the same wonderful post that Maggie Bennett made her in. She’s the Micro Mini Bucking Horse sculpted by Maggie and cast in pewter by EquineArt Creations. The mold (and Maggie’s other amazing, tiny, detailed micros) are for sale straight from Maggie’s website.

I hope that I can do Sierra Roana justice and restore her to her former glory, once I’m unpacked from the move and all. I intend to get a thin acrylic rod from Myla Pearce and support her with the rod in her belly and the base. I had intended to update her finish as well, and now I really have something to live up to! I have to admit, of all the models I painted, this is not the one I would have guessed to win a Reserve Grand Championship in workmanship!