I’m not really one for New Years resolutions, but I really would like to be blogging more. I’d love to get to a point where I’m posting a few times a month, instead of the current sorry state of a few times a year.

It’s not that I haven’t been active in the hobby- I’ve been showing, customizing, and following my favorite hobby blogs. I have things to share… I just need to share them.

Last night I snuck in a bit of customizing amidst the holiday busyness. Erin had just given me a stupendous unicorn mug and I was very pleased to be drinking my evening tea out of it while building a neck for my next performance horse. 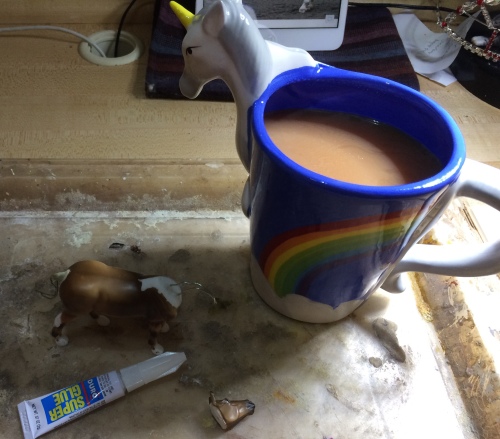 Necks are always a pain to get right, and I was holding up my horse pieces and squinting at my reference… and the inevitable happened. 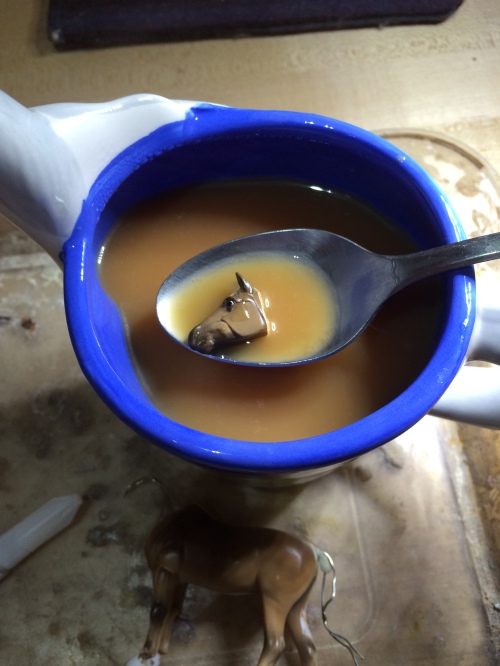 I was so stunned that for a few moments I just sort of stared at my tea. I briefly considered fishing the head out with a sculpting tool (they were near at hand) but I figured that a spoon would be cleaner and easier.

The head was rescued and is now securely attached. And I learned an important lesson about holding small plastic bits over vats of heated liquid.

On Wednesday I took Cochise out to the nearby cross-country horse to practice. It was only our second time out. Even though it’s still very new and he was really worried about not having a herd-mate, he was wonderful. We rode for over an hour and both had a great time. I don’t have any pictures but it looked something like this: 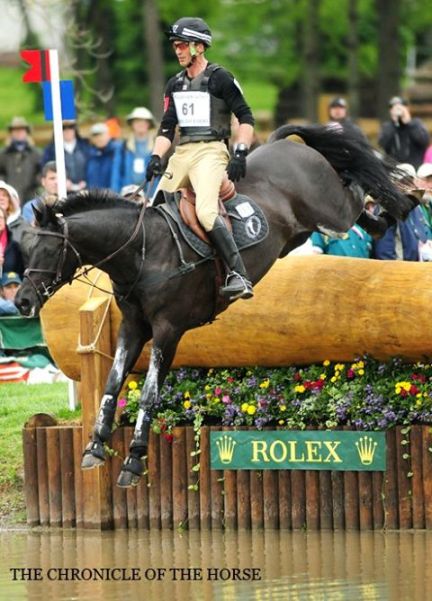 When we got home and Cochise was back in the summer pasture with his herd, Robyn suggested that we clip Thistle, who hasn’t shed out her winter woolies. All the other horses have their summer coats on, but poor Thistle was still sweltering under a lot of extra hair. We set out to rescue her from the heat.

But of course the best thing about clipping a horse is that you can shave designs into their butt. We’ve already done stars, hearts, and initials, so we decided to try something new. Thistle’s nickname is “The Pufferfish” because she puffs up when you saddle her, so we went with a nautical theme.

For optimum precision, we opted to paint the designs first. So I fetched Robyn’s amazing Beauty Box. The Beauty Box is a magical tub containing everything you could ever want to decorate a horse. There’s the usual rubber bands and show sheen but also hoof glitter, clip on flowers, Kool Aid (yes, it works) and paint. 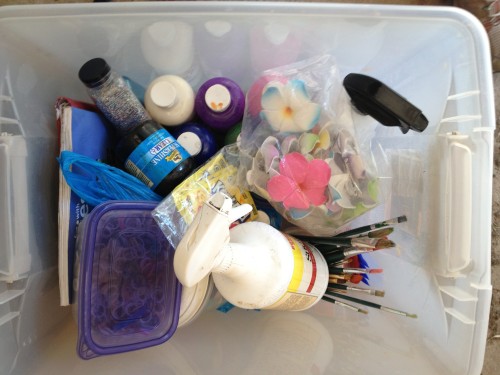 I used the white paint to draw the our designs on Thistle’s rump. Then Robyn (the more skilled clipper) did the shaving. 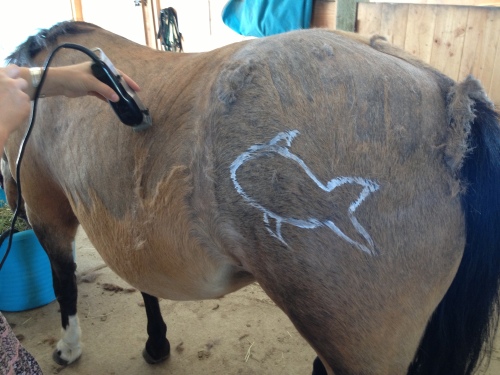 After we finished clipping her (you could almost hear her sigh of relief) we washed off the excess hair and the paint. She grazed in the sun while we brought the other horses in for dinner. And behold, the finished artwork! 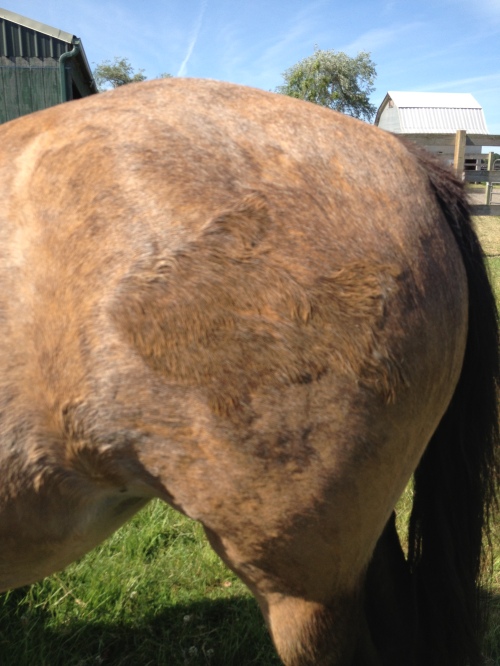 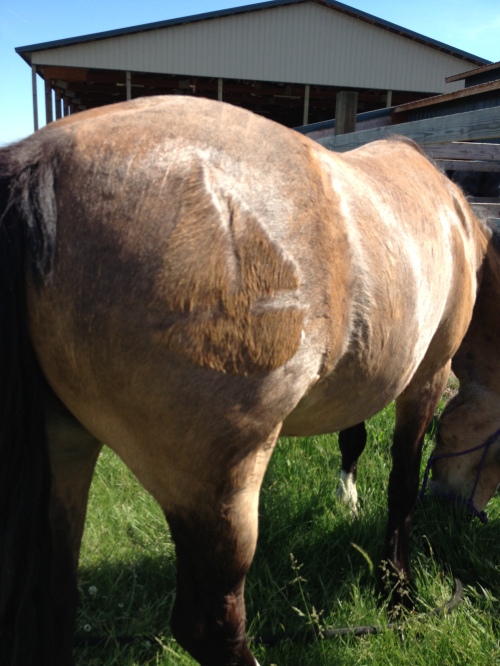 Teehee! I don’t know any other pony who has a sailboat!

If all goes as planned, this post will publish while I’m flying back across the pond. It’s always sad to say goodbye to travelling, but I am excited to be home, looking forward to a wonderful summer with a lot of jumping and other fun.

I’ve been following a bunch of horse picture tumblrs lately (a dangerous habit!) and I ran across this awesome picture. This horse looks stunningly like my snotty little model pony, Alpo. I wish I’d had this picture for a reference when I was working on him!

Want to drool over some pretty ponies yourself? Fall down this here rabbit hole- but don’t blame me for any lost productivity :) How about some beautiful models? Jennifer Buxton has been photographing and cataloging her amazing collection.

I bet you can guess what I’m gonna say… busy with work blah blah not doing much no time to blog blah blah… Yep, something like that.

My only real progress this week was a little bit of reference picture finding and putting some acrylic patchwork on Kettil to hide the tail-job I gave him. Maybe this weekend I’ll have something more substantial to show… but let’s not count on it.

I’m counting down to the end of October because of the NW Congress Live Show, but most other people are looking forward to Halloween. My friend tipped me off to this rather amazing horse costume a while ago I’ve been saving the pictures for a rainy day. 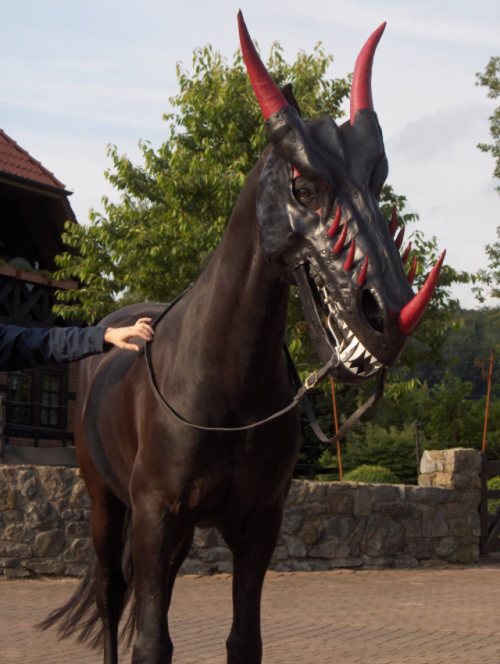 I mean, who doesn’t want a dragon horse? Pulling out those pictures made me want to look for more amazing costumes, and oh internet you do not disappoint.

Alice and the White Rabbit

Grapes! (and a gorgeous Fjord stallion!) Photo by Laurie With.

Fish and Fisherman! Yes, I think there’s a horse in there.

The moral of the story? I gotta get cooking on some costume entries!

Since arriving home I’ve been spending lots and lots of time working on models, getting ready for two shows coming up in September. I’d like to finish my two commissions and two show donations, and a couple show horses for myself. I have a list and everything.

Alas, not everyone in the family is so committed to pony progress. Bookcase, the needy socialite kitty, reeeeeallly missed us. And she takes every opportunity to express her happiness that we are back. 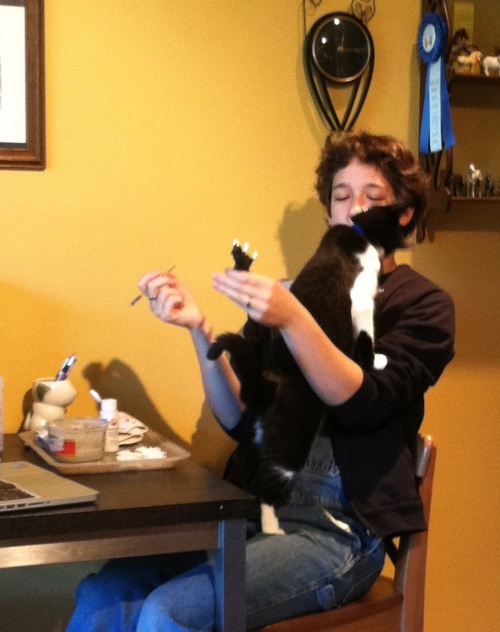 Luckily after a few minutes of head butts and face-licking she’ll usually settle in my lap or across my shoulders like a scarf. And then I can get back to work.