Most models have a good handle- their tail sticks out, or they have a base, or something else easy to hold while priming, fixativing, or painting. But sometimes you have to get creative.

When my main projects are drying or otherwise on hold, I’ve been working on some of Maggie Bennett‘s awesome micro mini resins. They are super fun and I enjoy painting them in acrylics.

Because of her size and her pose, Kahlua doesn’t have a great handle. I needed to spray her initial layers with fixative, so I decided to get creative. The advantage to her pose is that she has a large area that won’t be seen- her belly and bottom.

So I grabbed my trusty dremel, picked just the right bit, and caaaarefully made a hole in her belly. 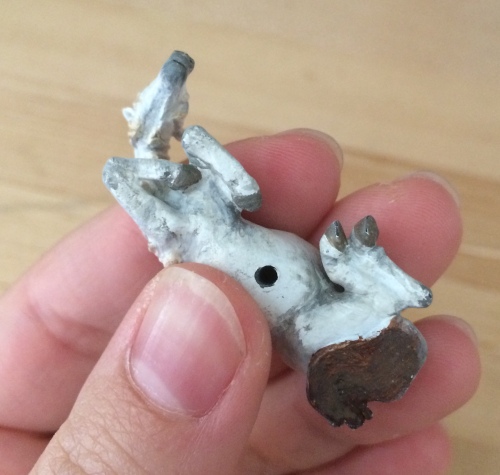 The drill bit I used was chosen to match the size of a toothpick. And thus…

Micro on a stick!

I made sure she was firmly on there… 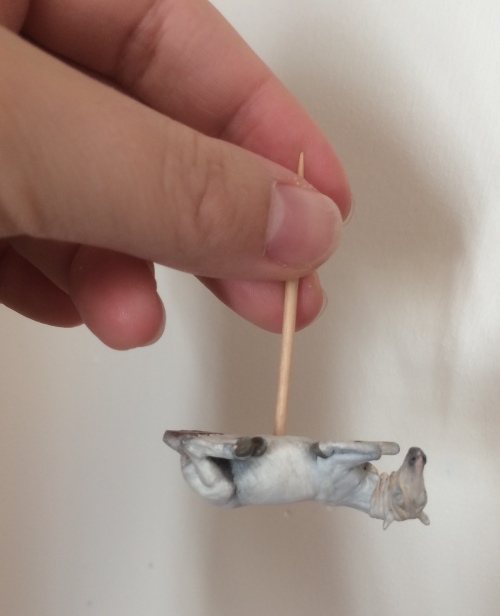 …and then took her outside for an all-over spray of Dull Cote. Then I simply planted her stick in a glob of playdoh.

Easy peasy! She’s drying safely on the shelf next to her buddy Hazel, who also got a layer of fixative.

Hurrah! This will make the rest of my work on Kahlua much easier.

Morgan Kilbourns Mini Hazel resin is cast with a base, which I am removing as part of this commission. She now has an acrylic rod in her front hoof to provide stabilization.

Removing a resin from an attached base is a time consuming process. It’s not terribly difficult, although I do recommend that you only attempt something like this if you are also confident doing small repairs and minor resculpting. Unless you have a way steadier hand than I do, you’ll inevitably end up having to resculpt a bit of hoof or fill in a gouge somewhere. 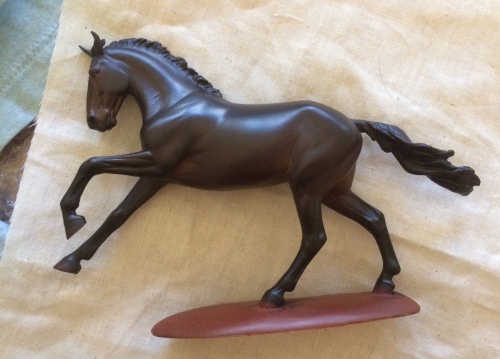 Hazel before- securely attached to her resin base.

Generally something like this would be done in the sculpting and prepping stage, so the resin would be blank. Here I’m doing it with the paint job largely done, so I’ll need to protect the finish. Even on a blank resin, these kinds of precautions can help keep your horse safe while you work on it.

I wrapped Hazel in several layers of cotton and then fleece, leaving only her back hooves exposed. I used rubber bands to loosely hold the fabric on while I worked.

For the next step, I got out my trusty dremel. I wanted to cut through the thick base around the hooves to get the bulk of the resin off before I worked more closely to the hooves. For something like this I often use a large drill bit and use it to gnaw sideways through the resin. A round cutting bit- especially a diamond bit- will also work.

A key thing to keep in mind with something like this is that you want to keep as much stress as possible off the parts you’re keeping- in this case, the legs. I was careful to hold the legs still to minimize the amount of vibrations from the dremel. This prevents weakening the important bits.

After some quality time with the drill bit, I had taken off the front chunk of the base and the middle bit, leaving little stumps under the hooves.

Now I switched to a diamond cutting bit (pictured above) and very carefully cut away the bulk of the stump, leaving a few millimeters of resin under the hoof. Again, be sure to hold the hoof stable and only let the dremel shake the part it’s slicing off. 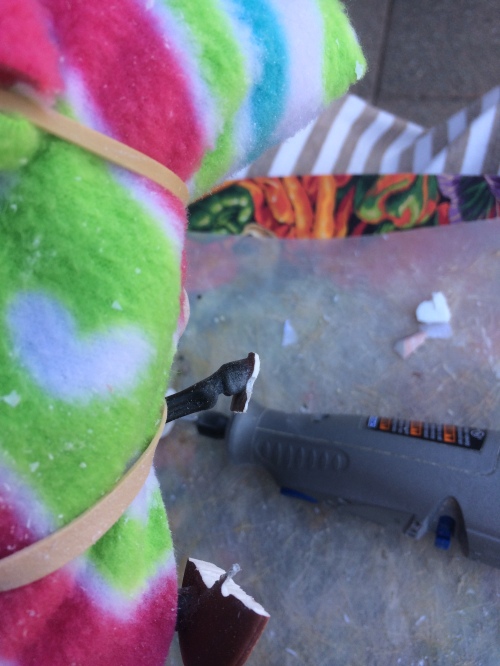 You can see in the photo above that- like many resins- Hazel was cast with wire in her legs for stability. The wires go all the way into the base. As I cut away the bulk of the resin, I also had to avoid the wires. Once the resin was cut away, I snipped the wires down as far as possible.

Once both hooves were resting on just a bit of resin, I sat down with my carbide scrapers, needles files, sandpaper, and an exacto knife. I used the knife to cut through the thin resin around the hoof. As I got closer to the hooves, I switched to the carbide scrapers and sandpaper to remove excess resin without damaging the sculpted parts. I used the needle files to shave down the rest of the armature wire. Slowly I got the hooves reshaped and flat.

The last step was to add the acrylic rod to the front hoof so Hazel can balance. For this I used a small drill bit about the same size as my acrylic (1/16 inch). I carefully drilled straight up into the hoof, trying to go as far as possible without coming out the top (inevitably I failed, and had to patch the top of the hoof). Then I estimated the length of acrylic needed, cut a generous piece, and inserted it into the hoof. Then you just need to use the needle files and/or sandpaper to adjust the length, and glue the acrylic into it’s final position. 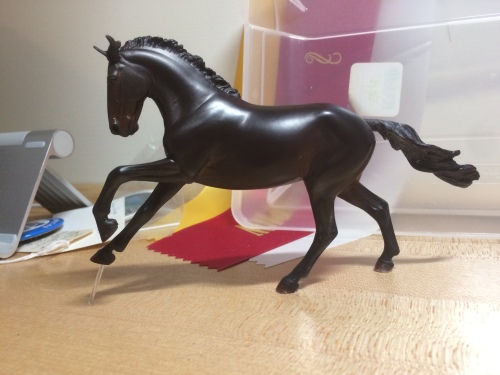 All done! Now I just need to give her a bath to get the resin dust off, and I can move on to more painting!

My focus for the last few weeks has been two trade-commissions I have in progress. I’m very eager to get both of these horses back to their owners with their new paint jobs.

First up is this Moxie resin (sculpted by Sarah Rose). She’s very close to finished as a red dun overo. She still needs her mane and tail painted and other acrylic details, but her body color- acrylic markings over oils- is done (and dun!).

Next to Moxie on the shelf is this Mini Hazel resin (by Morgen Kilbourn). I had always loved the traditional sized Hazel resin so I was very excited when Morgen cast her in mini size. I am painting this one to a deep dark bay. I wish she was easier to photograph- I’ve done many layers (more than I’d anticipated!) on the way to capturing the purpleish and gold tones of the reference picture. She still has more oils work to go and will be finished up with some minimal whites. 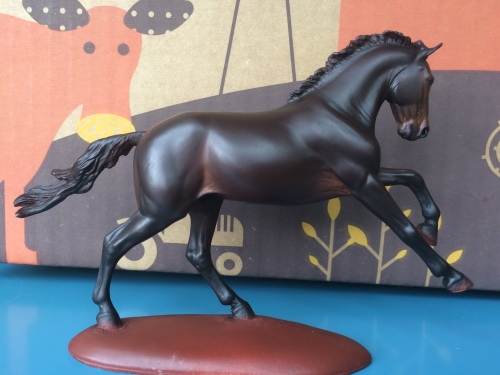 The other piece demanding my attention is my newest performance horse, RoboClop. I showed him at BreyerWest as a solid bay, but he was always meant to be a pinto like my reference picture. I finally got his markings on and I’m really pleased with how they came out.

Showing in English Pleasure at the Region 1 Championship Show

I’ve had a few weekends away but I’m looking forward to a more low key weekend coming up- with lots of time set aside for painting.

In the Studio After BreyerWest

Most of my hobby time since January was spent preparing for BreyerWest- customizing and painting RoboClop, making tack and props, and obsessively planning my classlist. Back in the studio now, I’ve got a number of fun projects in the works.

The work in progress cupboard

I’ve got two trade-commissions going: Hazel needs a few more coats of oils and her markings, while Moxie is getting her pinto pattern and acrylic details. I bought two of Maggie Bennett‘s fantastic resin micros at BreyerWest, one of which is half painted and the other of which I have grand plans for. On the right are two new horses (a CM and a resin) that I had just started in oils when the BreyerWest madness really took hold.

One thing that didn’t get done in time for BreyerWest was RoboClop’s pinto coat. He showed as a pretty bay with high whites, but he was always destined to be a tobiano. He got a bath to take off the sticky wax and now he’s getting his markings mapped on in colored pencil before I start layers of acrylics. 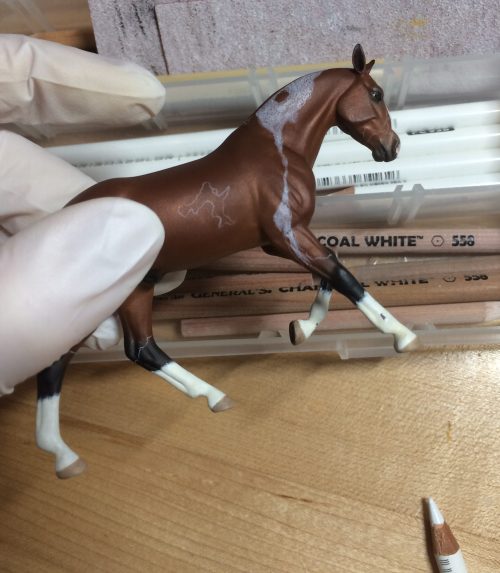 I’m loving having the new micros to work on- I like to do micros primarily in acrylics, and it’s fun to work on them between coats on other horses. This fantastic little sculpt is called Bambi, and she’s currently half dappled grey. 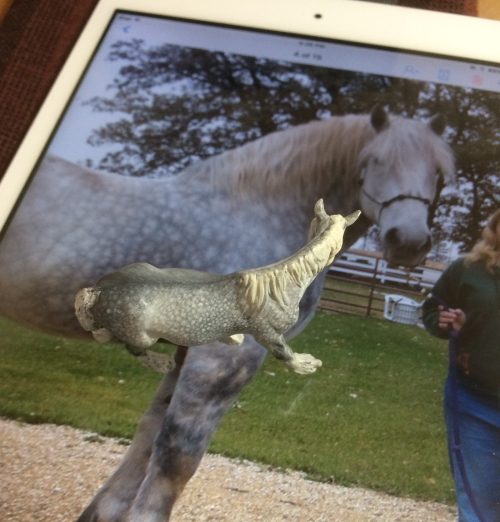 Sitting on my iPad with my main reference picture.

Lots of good fun in the future for me! Just one little thing delaying my work… I’m about to fly to Italy for a three week vacation :D Wheeeeee!

I am why I can’t have nice things…

In December I lucked upon an ad on MH$P for a Mini Cromwell resin at a very affordable price. I’d had my eye on this resin so I jumped on the opportunity and grabbed him.

I really like this resin as is, but I want him to be a performance horse (I just love drafters under saddle!) and his face is a bit narrow for his breed. So only a few weeks after this guy came to his new home, he found himself going under the knife…

It’s funny to start cutting on something so nice and new, but I have a vision. I promise I’ll put him back together! 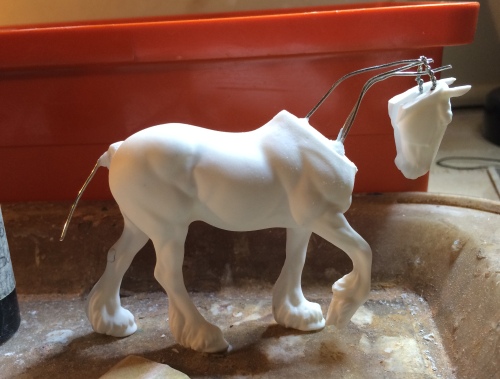